The halcyon days of steam were not always free of mishaps along the line.

As the anniversary of the closure of rail passenger services through Bourne approaches, Thurlby’s Joyce Stevenson looks back at the golden age of steam and some of the mishaps along the route.

THE Bourne and Essendine railway was opened on May 16, 1860, and over the years provided Bourne’s first and longest serving passenger route, connecting the town with the main east coast network run by the Great Northern Railway (GNR).

Passenger and goods trains puffed back and forth along the six-and-a-half mile track for 91 years, fol­lowing a route which curved gently along the fen edge from Bourne through a countryside of woods, hedgerows and a patchwork of small fields. Sadly, those halcyon days were punctu­ated with occasional acci­dents and mishaps along the line. 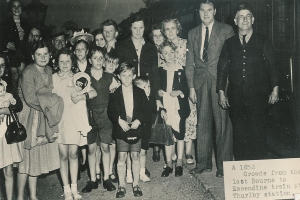 Joseph Birkett, the 21-year-old son of the Wilsthorpe crossing keeper, was one who lost his life on the line. Joseph was employed by GNR to extinguish fires caused by sparks from the steam engines but in August 1870, he died as a result of horrific injuries which were sustained when he laid on the railway track in the path of a train approaching Thurlby station. His wasn’t the only inci­dent and one morning dur­ing the summer of 1892, an engine and four trucks were derailed and overturned at Wilsthorpe siding.  A mistake by the points operator caused the acci­dent but in this case the consequences were not tragic. The guard was badly shaken, but there were no injuries, and by afternoon engineers had the goods train safely back on the rail,

The old trains were so punctual they were often used as a time-check; but there was one occasion when a delay resulted in a serious accident. On a July day in 1890, a shepherd, John Cooper, was taking a flock of sheep to Ogery Farm (west of Wood Lane, Northorpe).

To reach the farm they had to cross the railway. On arrival at the crossing, the shepherd, who was deaf, carefully checked his watch and noted the train would have passed 15 minutes ear­lier. He opened both gates and drove the sheep across the track; but before he reached the opposite gate the Essendine train, which was running late, came speeding round the bend, Mr Copper frantically waved his arms to warn the engine driver to stop the train. The sheep in panic, ran back across the track in front of the train. Forty of the sheep were killed. The badly mutilated carcasses were taken to Bourne where they were prepared by a local butcher and dispatched to the London Metropolitan Meat Market. 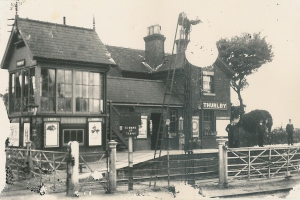 In another fatal accident 71-year-old Sarah Ann Hare was hit by a railway engine between Bourne and Thurlby on Wednesday, October 11, 1916. Mrs Hare’s injuries were so severe that it was only later, following inquiries, that she was iden­tified. The inquest at Thurlby, the day after the accident, revealed that Sarah Ann had gone sticking and was walking along the public footpath which ran through her garden across the rail­way and into the north fields. The fireman on the 10.45 train from Bourne saw Mrs Hare climbing over the stile to cross the line and sounded the whistle, but being deaf she was unaware of the train. Following the accident, engine drivers were ordered to blow the whistle when approaching the crossing, which also gave notice of the immi­nent arrival at Thurlby sta­tion; and frequently acted as a time-check.

On another occasion, a quick thinking signalman averted an accident when a goods train, approaching Bourne, could not be stopped. The engine driver was unable to apply suffi­cient braking power to slow the runaway train but for­tunately the Bourne West signalman heard the con­tinuous whistle and seeing sparks flying from the wheels, altered the Bourne East signalman. The speed­ing train was diverted onto the main line and through the open gates of the South Street crossing – eventually coming to rest on the Sleaford branch line.

Without the quick think­ing signalman, the train would have crashed through the siding buffers onto South Street.

Thankfully, accidents were few on the old B and E line. Many thousands of passengers and countless freight trains were safely transported to their destinations. However, sometimes things didn’t exactly go to plan. One market day some cat­tle vans were shunted and attached to passenger coaches at Bourne station. The engine departed on schedule, bound for Essendine. Only when it arrived at Thurlby station did the engine driver realise the coaches were still stand­ing at Bourne station – no one had coupled the car­riages to the engine.

Railway was so popular

Published in the Rutland and Stamford Mercury – September 14 2007

Our area is blessed with some of the finest quality water from natural springs and artesian wells.

Because of the natural springs at Braceborough the new railway was routed about one mile from the village through Braceborough Spa. For many years the health-giving water was despatched in wicker baskets containing five-gallon bottles from Braceborough Spa station, some being sent regularly to 50 Wigmore Street in London. When the popularity of the spa declined and it closed in 1930, the station was downgraded to a halt.

Watercress from Bourne and Kates Bridge was transported in a railway van from Bourne to the London markets, five nights each week.

The local line also brought iron tubes to Thurlby for John Elwes Noble, who bored artesian wells throughout the district.

When Peterborough Corporation Waterworks opened at Wilsthorpe in 1880, a siding was laid for the delivery of coal to fuel steam pumps. Wagons of coal and coke were delivered direct to the railway goods yards at Essendine, Thurlby and Bourne, where it was collected in horse-drawn carts.

Horse dealer Joe Carr had horses shipped from all parts of England and Wales to Thurlby Station. Seed potatoes, beet pulp for animal feed and fertilisers also arrived by rail. Timber was transported from Thurlby Station by John George Wade who had a wood yard at Park Farm. Churns of milk from dairy farms were collected daily. Farmers sent cattle sheep and pigs by rail to market. Sugar beet was loaded into railway wagons and despatched to sugar beet factories for processing. During the winter 30 wagons of beet were collected from Wilsthorpe Halt and, just four days before the line closed, 300 tons of beet was despatched from Thurlby Station.

Tom Courton, of Thurlby, remembers well the hard work of farming as a teenager in the 1940s, especially carrying and loading heavy sacks at the station, many weighing as much as 18 stones when filled with grain or potatoes. As a school boy Tom also travelled to school at Bourne on the train.

The drivers of the goods trains sometimes made unofficial stops to pick blackberries and mushrooms beside the track. Local legend tells of an engine driver and fireman setting snares for rabbits on the evening run and collecting their catch the following morning.

The advent of the branch line opened up a new world of transport and travel. By the beginning of the 20th century local stations displayed posters for rail travel to places like Paris and The Rhine. Some children and teachers travelled to schools at Bourne and Stamford by train. Adults had a choice of local markets they could visit by rail and there were Sunday School outings to Skegness, Hunstanton, Cleethorpes and Mablethorpe. Excursions to London for special events, such as the Wembley Exhibition of 1924 and the Coronation of King George VI, on May 12, 1937, were advertised in the local press.

By the late 1930s business on the Bourne and Essendine branch line was declining, but during WW2, there was a resurgence of passengers and freight.

By 1950, the future of the Bourne and Essendine was looking less certain and the railway crossing keepers received preliminary notice of termination in May 1950. Bourne Urban District Council protested and resolved to do everything possible to keep the line open. But, by the end of April 1951, closure plans were confirmed and the Bourne to Essendine Railway closed on June 16, 1951.

The Stamford Mercury reported the final Bourne and Essendine round trip under the heading: “Janet’s Last Trip on Bourne Line.” ‘When the “Janet” (no 43062) prepared to leave Bourne Station at 7.55pm for her last run on the line, the scene was one of extreme gaiety. Cameras focused on the crew who posed in front of the engine and more people boarded the train than the line has known for years.

‘Despite the symbolic black flag (beside a Union Jack at half mast) ‘carried atop the loco, it was more like an opening than a closure…’...And so the journey began for the last time, amidst the excited squeals of children and the thunder of fog detonators, laid on the track to help give a hearty send-off.’

Charles Brown at Thurlby Station with passengers alighting from the last train through Thurlby. ***See below for information regarding the people in this photo,

At Thurlby and Braceborough Spa there were more crowds, some boarding the train at each station until it was standing room only when the train steamed into Essendine. After the Peterborough and Grantham connections had arrived, at precisely 8.51pm, the packed train left Essendine to the crack of more detonators, which had been laid along the track as far as Carlby bridge. Passengers alighted at Braceborough and Thurlby leaving a few to leave the train in a quieter and sadder mood as they handed their tickets to station master Mr A C Scott.

Workmen began removing the railway track at Essendine on Monday June 18 and by July they had reached Thurlby.

Over the years the railway buildings, fittings and fixtures disappeared and houses were sold. The goods yard at Thurlby became a highways depot. The old goods shed at Bourne was demolished in 2005, followed this spring by Carlby road bridge, the last structure on the Bourne and Essendine Railway. All that remains of our branch line are street and house names, memories, memorabilia and photographs.

***Regarding the photograph above the following information was

I believe that those in photo, starting from right are:-

in front of her my cousin Barry Osborn

Next to them are a lady with child in front whom I don’t recognise!

Next to lady is Evelyn Hull

Right in front in centre is Andrew Cappitt,

To his left is his brother David.

Face looking over his shoulder on our right is me

Behind us next to Evelyn is, I think, Georgie Needham,

Girl next to him I don’t know.

To David’s left is his elder brother John.

To left of Marjorie is Stanley Peasgood.

The girl next to John I don’t recognise.

Next to her is Pat Sharp?

Girl half cut out of picture on left I can’t recognise.

At very top left is Diane Sandall sitting of shoulders of her father Jack Sandall.