Thank you to Clive Baker who got in touch with the following information and memories, it is lovely to bring village families to life.

“My daughter and I are the only living descendants of the Inkley family who lived in the cottage, now known as “Inkley’s Place” at Thurlby.
My grandfather was Arthur Wade Inkley, the youngest son. He moved to Burton upon Trent some time before WW1, having first worked at the Grange, between the village and Bourne.
He married Dorothy Hunt, fathering two daughters, Molly Noreen, my mother, and Margaret May, only two of the five Inkley children married, the other being Nicholas, and he was the only one to have children. Called-up for service late in the war, he survived by nothing less than a miracle; shot in the abdomen, he lay on the ground and avoided further attack by pretending to be dead. He lay there for two to three days with only a packet of Woodbines for comfort until rescued by soldiers looking for the guns of dead soldiers. He was lucky that a surgeon was at hand with the necessary skills and made an excellent recovery. His was employed in Burton until retirement as a grocer’s assistant at Wilkinson County Stores. He passed away in January 1966 having suffered a stroke and was cremated at Derby.
I remember him with great affection, being gentle mannered, nothing seemed to stir him, and that is probably how he survived the horrors of Flanders.
Elizabeth May Inkley, the youngest daughter became a school teacher, first at Thurlby but, for the remainder of her career, at Fulbech where she lodged during the week. She eventually sold the family home at Thurlby in 1965 and spent the rest of her life at Fulbech where she died in 1983; her resting place is in Fulbech church yard.
I’ll never forget her funeral, expecting to be one of just a handful of mourners, I was shocked to find the church packed, mainly ex pupils paying their respects.
George Inkley, the eldest son is well documented on your website, Nicholas Inkley survived WW1 returning to the building trade and marrying Eva. Olive Inkley, a surviving twin, who I do remember began work in service and died some time in the fifties.
I returned to Thurlby in 2009, having not visited since 1965, and immediately found the cottage, being quite touched that it bore the name of the old family who I think moved to it in 1866 when George Inkley married Susannah Wade, daughter of John Wade a timber merchant in Bourne.” 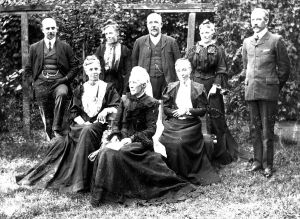 Back row left to right – unknown, Elizabeth May, George (father), unknown, unknown. Front row: unknown, Susannah, unknown. I suspect it is a gathering of the Wade family and the three front row ladies look like sisters